“It was great to be able to utilize the resources of the Maine SBDC and to tap into John’s knowledge. Without the Maine SBDC, I wouldn’t have known about the bank I eventually ended up receiving the loan from, and without John I would have never heard about the Libra Future Fund Grant.”

As event manager of BikeMaine, a seven day cycling tour in Maine featuring between 200-300 riders, Zachary Schmesser noticed during the first year of the tour that many of Maine’s small towns didn’t have the capacity to provide adequate showers for the cyclists. Cyclists were in need of a hot shower after a long day of riding. They needed easy access to showers that provided consistent hot water. He wanted to start a business that provided shower units at the site of these types of events. 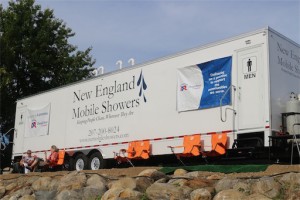 Schmesser came into the Maine SBDC to see Center Director and Business Advisor John Entwistle seeking help obtaining funding for his new business venture. He needed capital to purchase the mobile shower unit that would be used at events, festivals, disaster relief and construction and had tried several times to secure a commercial loan without success. Entwistle helped Schmesser review his business plan identifying potential red flags for a bank and assisted him in revising his market analysis and financial projections. Entwistle also suggested Schmesser apply for a Libra Future Fund Grant, which capitalizes upon the energy and creativity of Maine’s young people by awarding grants to individuals to promote economic development and job creation in Maine. Entwistle suggested how to format his proposal to illustrate the community benefit of the venture. In May 2014, Schmesser and New England Mobile Showers secured both the bank loan and the Libra Future Fund Grant. In August, the 39-foot, 16-shower trailer arrived, and has since done multiple events including Revolution3 Triathlon in Southern Maine, Berkshires to Boston Bicycle Tour in Western Massachusetts and, of course, BikeMaine.